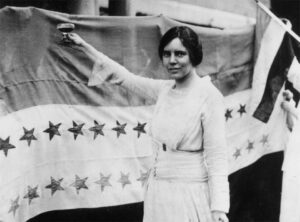 (Presentation to be held on the grounds of the Haverford Township Historical Society – Nitre Hall, Karakung Drive, Havertown)

Join us for this outdoor, masked and socially-distanced presentation by Actor/Historian Taylor Williams of the American Historical Theater

About Alice Paul: Blunt-speaking, no-nonsense Alice Paul was born into a Quaker family in New Jersey. Her many areas of studies and earned degrees included a BA in Biology from Swarthmore, studies in social work at the New York School of Philanthropy (now the Columbia University Graduate School of Social Work) and the University of Birmingham. Her continuing pursuit of a higher education took her to England where she was inspired by Britain’s Christabel Pankhurst to speak out for women’s right to vote. Paul joined the fight for suffrage in Great Britain, returned home to work with the National American Woman Suffrage Association, founded the National Woman’s Party, campaigned against President Wilson’s refusal to support woman suffrage, went on hunger strikes and was jailed in order to secure the 19th Amendment. When that passed, in 1920, Alice Paul wrote and worked for the Equal Rights Amendment, introducing the bill in 1923. The ERA has been introduced to Congress every session since 1982, but has never gotten out of committee.

Registration is required for this program. To keep everyone safe, we will be limiting the number of people at the presentation along with asking you to socially distance and wear a mask. To register click here.